Long awaited stats from December 2020 show that even though people returned to work in the latter part of last year – reduction in salaries and income interruption has led to an increase in the percentage of financially impacted SA consumers. And as a result, SA consumers can’t afford to pay their bills.

New data from TransUnion shows that 82% of consumers (an increase of 3 percentage points from the data previously released) are struggling.

37% of those impacted have had their work hours reduced. The largest percentage of this group can be found in the retail, information technology, financial services and manufacturing industries.

The TransUnion report also showed that 18% of impacted consumers have lost their jobs. This is just 3 percentage points from the highest level reported in August (21%). And substantially higher than April (10%).

More than half (52%) of those who report they have lost their jobs are millennials. While 40% of consumers who report job loss are from Gauteng, with many people being from the retail, construction, educational services and restaurant / food services industries.

On average, R7,069 is the amount consumers expect they will be short when paying bills or loans.

TransUnion said that credit products remain the bills and loans consumers most often indicate they will not be able to pay. With personal loans (37%), retail/clothing store account (32%) and credit card bills (32%) ranked in the top three.

People have changed their lifestyle and adjusted their budget to accommodate the decrease in their household budget. In December, 59% of impacted consumers indicated they have cut back on discretionary spending. 43% have cancelled subscriptions or memberships and 33% have cancelled or reduced digital services.

To manage household finances, consumers are increasingly cutting back on saving for retirement (+4 pp to 26%, the highest level reported to date). Two-thirds of households (66%) expect to spend less on dining out, travel and entertainment purchases in the next three months, TransUnion said.

What bills and loans are consumers concerned about their ability to pay? 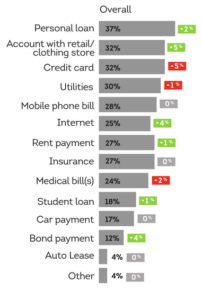 What has changed in most household budgets during the Covid-19 pandemic? A significant percentage of consumers continue to indicate they are using money from savings (35%). While this creates a short-term cash flow position, there are longer-term macro-economic consequences to this approach. These include a shift in retirement age and potential assistance at retirement as personal savings have eroded during the crisis.

CEO of National Debt Advisors, Sebastien Alexanderson says that consumers should review their debt options before legal action gets taken by creditors. “Many consumers continue to deny the reality of their situation. Subsequently leaving it too late to find viable solutions. Consumers should ideally be looking at options like debt review (as per the National Credit Act) the moment they are unable to service their regular monthly debt repayments and afford their living expenses. And not wait until legal action has commenced by a creditor. By this point in time they will find themselves having to fork out monies for legal fees – on a debt which could very easily have been restructured by a registered debt counsellor.”